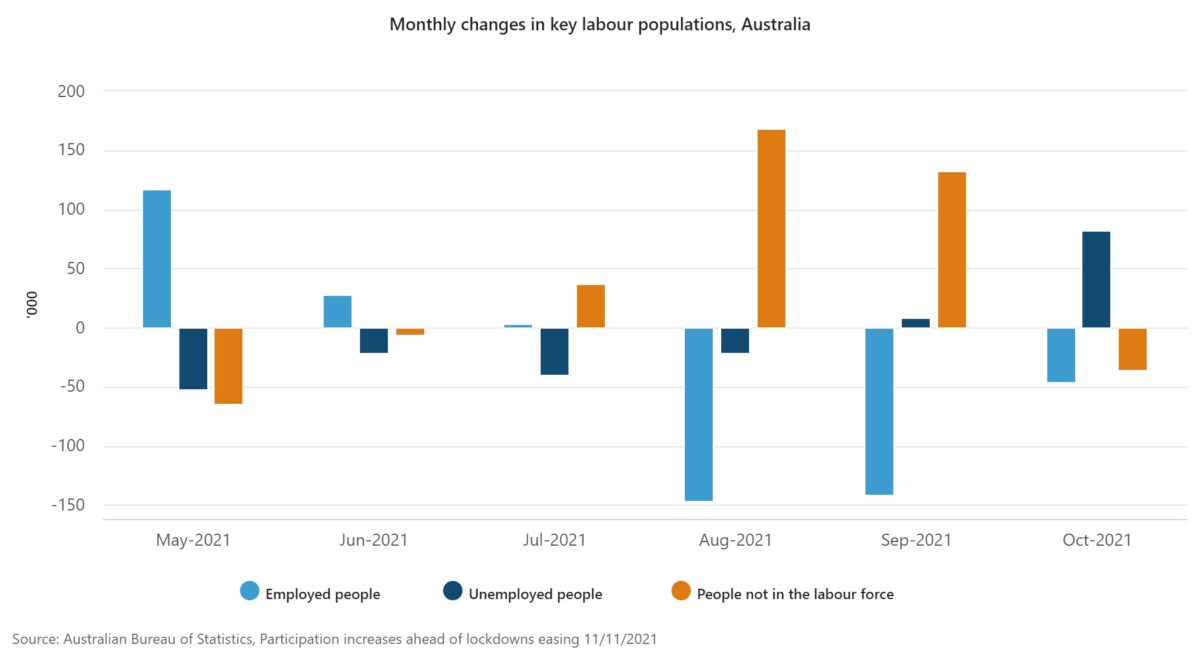 According to the Australian Bureau of Statistics (ABS), Australia’s seasonally adjusted employment fell by 46,000 people (0.4%) in October 2021, while participation increased (0.1 percentage points).

Bjorn Jarvis, head of labour statistics at ABS, said the latest data covered the period from 26 September to 9 October 2021. This included school holidays and some early changes to restrictions associated with the Delta lockdowns, particularly in NSW, ahead of larger changes from mid-October, stating: “As we’ve seen throughout the pandemic, changes in the labour markets with lockdowns continued to have a large influence on the national figures.

“In contrast, while Victoria’s unemployment also increased by 29,000 people, employment fell by a further 50,000, with their participation rate falling by 0.4 percentage points. The Victorian labour force was 113,000 people lower than in May.”

“The increases in unemployment show that people were preparing to get back to work, and increasingly available and actively looking for work – particularly in NSW, Victoria and ACT,” Jarvis continued. “This follows what we have seen towards the end of other major lockdowns, including the one in Victoria late last year.

“It may seem counterintuitive for unemployment to rise as conditions are about to improve. However, this shows how unusual lockdowns are, compared with other economic shocks, in how they limit being able to work and look for work.”

Hours worked in NSW continued to recover, increasing by 3.9% in October, following the 2.7% rise in September. This was underpinned by increases in people working full-time hours as well as a further recovery among people who had been working reduced hours, though hours worked remained 7.2% below the start of lockdown.

“In Victoria, hours worked continued to decline more than employment (4.0%, compared with 1.5%).  This highlights the extent to which Victorians had reduced hours or no work through October, without necessarily losing their jobs.”

In the Australian Capital Territory, hours worked increased 3.1% in October, recovering part of the large fall in September (10.5%).

However, the changes in hours worked partly reflected changes in the patterns of people taking leave during the school holidays.

“Fewer people in New South Wales, Victoria and the Australian Capital Territory took leave during the school holidays – during the lockdown – particularly people who work full-time. This is something that we have seen throughout the pandemic, with some people working more hours than usual during holiday periods, in addition to the large numbers of people working less than usual,” Jarvis said.

Across the other five states and territories changes in hours worked ranged between an increase of 1.0% in Northern Territory to a 1.5% fall in South Australia. Some of the combined fall in hours worked across these jurisdictions reflected more people than usual taking leave during the school holidays, in contrast to the reduced leave taken in the jurisdictions in lockdown.