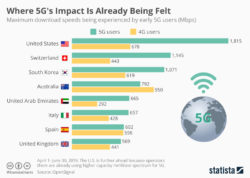 Even though the global rollout of 5G remains in its early stages, some networks are active and people are connected, including Australia.

Billed as a revolution over the 4G network it is replacing, 5G is already fulfilling some of its potential. That’s according to wireless coverage mapping company OpenSignal who measured 5G and 4G speeds in eight different countries. They found that some 5G users are already experiencing the dramatically higher speeds promised ahead of 5G’s arrival.

Commenting on the findings, Niall McCarthy from research firm Statista said: “The highest maximum 5G speed were experienced by US users with 1,816 Mbps – 2.7 times as fast as 4G users’ fastest speed. Switzerland came second with its early 5G adopters seeing speeds up to 1,145 Mbps – 2.6 times as fast as regular 4G users. South Korea came third with its 5G speeds reaching 1,071 Mbps while its fastest 4G speed was 619 Mbps. Elsewhere, the fact that the technology is not fully mature is certainly evident in some countries such as Australia where 4G outperformed 5G in download speed.

OpenSignal stated that this will naturally change as networks continue to expand. The US is so far ahead of the pack because its operators are already able to use millimetre wave for 5G which is a very high capacity and fast spectrum. However, it has very limited coverage compared to the 3.4 to 3.8 GHz 5G mid-band spectrum used in most other countries. The analysis adds that 5G speeds will improve further once the technology evolves to combine the performance of multiple bands and channels in order to boost maximum and average download speeds.