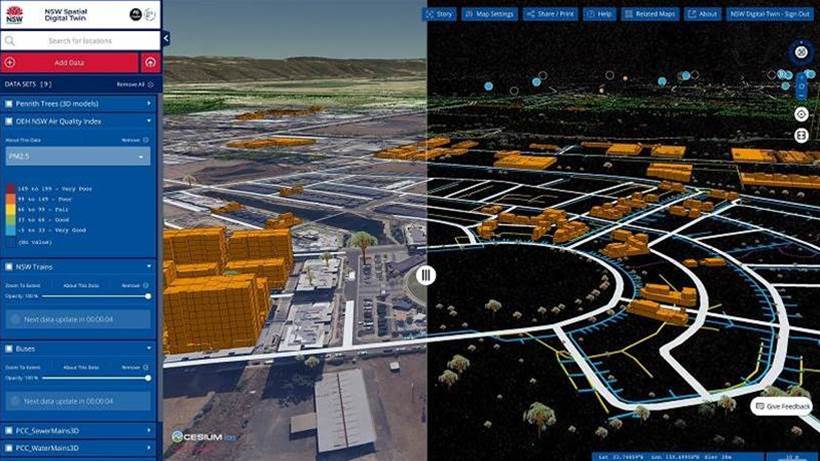 A consortium headed up by Telstra will build out the NSW government’s spatial digital twin proof-of-concept in preparation for its planned statewide expansion.

Telstra has been tasked with developing the beta spatial digital twin (SDT) over the next year after scoring a $1.86 million contract with the spatial services arm of the Department of Customer Service (DCS).

The SDT – a 4D model of buildings and utilities, strata plans, terrain and property boundaries that can be overlaid with real-time data – has existed as a proof-of-concept since debuting in February 2020.

NSW Spatial Services went looking for a provider – or consortia – in April to deliver the “technical components…. required to prove critical technical capabilities to [a] beta implementation”.

A DCS spokesperson told iTnews that new capabilities to be developed include “self-service APIs, automated infrastructure data feeds and near real-time imagery and elevation data processing”.

“The capabilities will be developed to beta implementation to support the SDT business case currently under consideration,” the spokesperson said.

It followed a recommendation in the independent inquiry into the Black Summer bushfires that the government “accelerate” the build to support firefighting efforts in the future.

The report found the SDT could help the NSW Rural Fire Service to locate and protect critical assets like telecommunications towers and other utilities in remote areas.

Telstra was one of the worst impacted infrastructure providers in the fires, with 329 facilitates – 70 percent of which were in NSW – suffering outages of four hours or more during the 2019-20 summer.

Spatial Services has also signed a $362,773 contract with CSIRO’s digital arm, Data61, to provide enhancements to the SDT, which is currently powered by Data61’s TerriaJS platform.

Enhancements include increasing the range of supported data formats and “introducing user-controlled symbology and features for interacting with 3D data”.

“Future hosting, maintenance and development work on the [digital twin] by Data61 beyond June 2022 is yet to be considered,” the spokesperson added.

Earlier this year, Victoria also announced plans to build a statewide digital twin, making it only the second state or territory to do so.