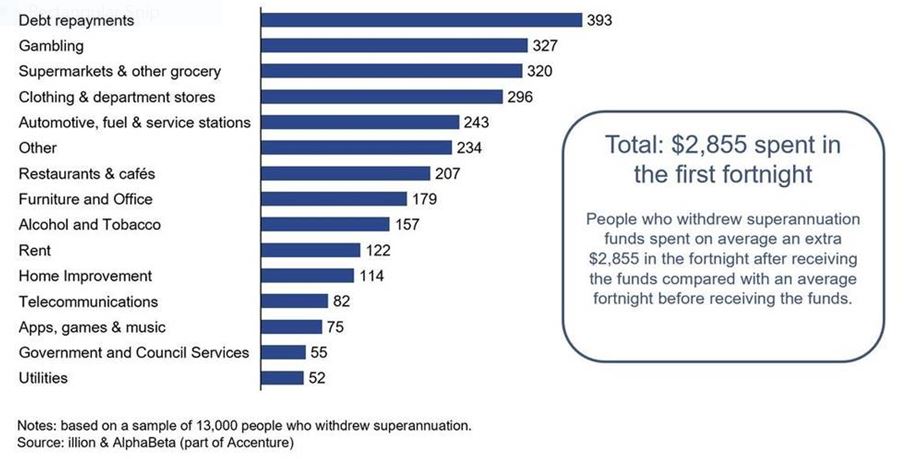 Analysis of the bank transactions of thousands of Australians who took out superannuation revealed some disturbing facts about those who withdrew it and what they spent it on. Many used the money to increase – not just maintain – their spending.

People have also spent-up big on their superannuation money: spending nearly tripled in the fortnight after the money was received, compared to an average fortnight before this money was accessed.

A third of this money was used up in the first two weeks. On average, people withdrew around AU$8,000 and spent an extra $2,855 in two weeks, compared with the same group’s average spending in a normal fortnight.

Disappointingly, 64% of the additional spending was on discretionary items such as clothing, furniture, restaurants and alcohol.

There’s also a group living very large on pizza and beer courtesy of tax-free superannuation. These are the most expensive pizzas they will ever eat! This money is available for anyone with a bit of superannuation who puts their hand up and it’s a situation that was entirely avoidable.

Other ways superannuation was spent:

Based on the compounding nature and investment returns of superannuation, spending this amount of superannuation on low-priority discretionary items such as fashion and gambling could have an impact worth potentially $100,000 when it comes to retirement.

There is a chance to address this and rectify it before the next tranche of superannuation payments can be accessed. The next round of releasing superannuation should be more tightly managed, with more due diligence over whether the applicants qualify.