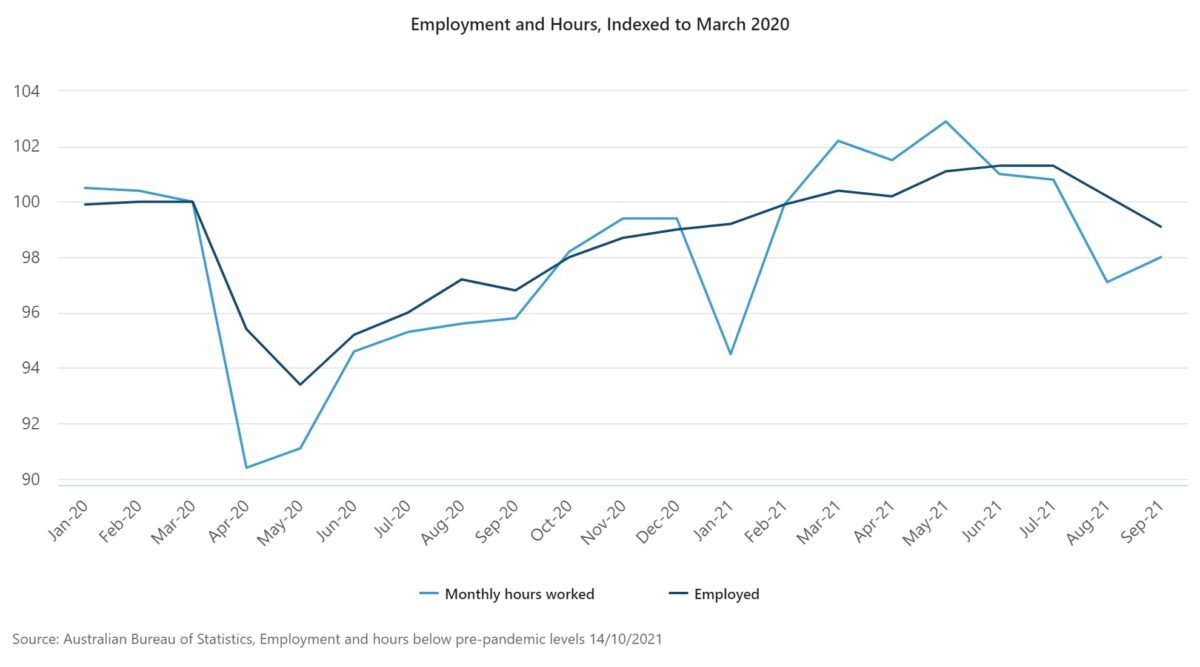 According to the Australian Bureau of Statistics (ABS), seasonally adjusted employment in Australia fell by 138,000 people (1.1%) between August and September 2021.

Commenting on the report, ABS head of labour statistics, Bjorn Jarvis said: “Extended lockdowns in NSW, Victoria and the ACT have seen employment and hours worked both drop back below their pre-pandemic levels. In September 2021, there were 111,000 fewer employed people (0.9%) and 2.0% fewer hours worked than in March 2020.”

With a combined share of almost 60% of Australia’s employed population, labour market changes in New South Wales and Victoria continued to have a large influence on the national figures.

In September, there were large falls in employment in Victoria (123,000 people) and NSW (25,000 people, following the 173,000 decline in August). This was partly offset by a 31,000 increase in Queensland, as conditions there recovered from lockdown early August.

The participation rate fell 0.7 percentage points to 64.5% – the third consecutive monthly decline from the near historic high of 66.2% in June 2021, which continued the pattern of large falls in participation during lockdowns.

The national unemployment rate rose 0.1 percentage points from 4.5% to 4.6% in September 2021. Notably, this low rate continues to reflect reduced participation during the recent lockdowns, rather than strong labour market conditions.

In September, NSW and the ACT both recorded their lowest participation rates since COVID began. Victoria’s participation rate also fell, but remained above the previous low during the second wave lockdown last year.

Over the past three months, participation in the labour force fell by over 330,000 people, while employment fell by 281,000 people and unemployment fell by 53,000 people. Beyond people losing their jobs, or working reduced or no hours, we continue to see how challenging it is for people without work to remain active within the labour market during lockdowns. This was also reflected in the mutual obligations for jobseekers living in lockdown areas in September.

Hours worked increased by 0.9% in September, a 3.7% recovery from the fall in August, partly reflecting the strong recovery in Queensland (5.4%).

Hours worked also increased in NSW (2.7%), following two months of large falls (6.5% in August and 7.0% in July). This was underpinned by increases in people working full-time hours, as well as a slight recovery among people who had been working fewer hours than usual in August.

There were large falls in hours worked in Victoria (3.6%) and the ACT (10.5%), highlighting the extent to which people had reduced hours or no work through the lockdown, without necessarily losing their jobs. It also shows that hours continue to provide the best indicator of the extent of labour market impacts from lockdowns.