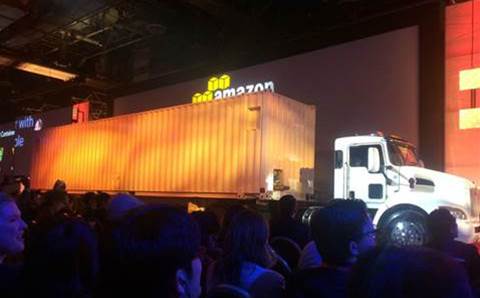 What has been dubbed the ‘Snowmobile’ is a dramatic expansion on the petabyte ‘Snowball’ transportable data migration boxes AWS unveiled last year, which can be physically delivered to the public cloud giant for rapid upload.

Jassy said the 45 ft (14 m) ruggedised, truck-drawn version is a response to customers who wanted to move much larger volumes of data to the cloud, adding: “Our customers said they love Snowball Edges, but if they had an exabyte of data, they’d need 10,000 of them.”

The Snowmobile comes with its own generator, drawing 350 KW of power, and a network cable capable of supporting data ingestion at a rate of 1 TB per second, which AWS claims can see the storage facility filled in about 10 days.

Jassy said it would previously have taken 26 years to upload an exabyte of data to the cloud over a dedicated 10 Gbps connection. With Snowmobile, he boasted, it can be done in 6 months.

AWS is targeting big enterprises and data-hungry start-ups with its new service.

“When we started AWS the notion of an exabyte of data seemed completely out there,” Jassy said. “Today an exabyte of data is a lot more commonplace. You be surprised how many companies – large enterprises and successful start-ups given the way they collect data – have exabytes of data.”